The Making of a Twin Mama 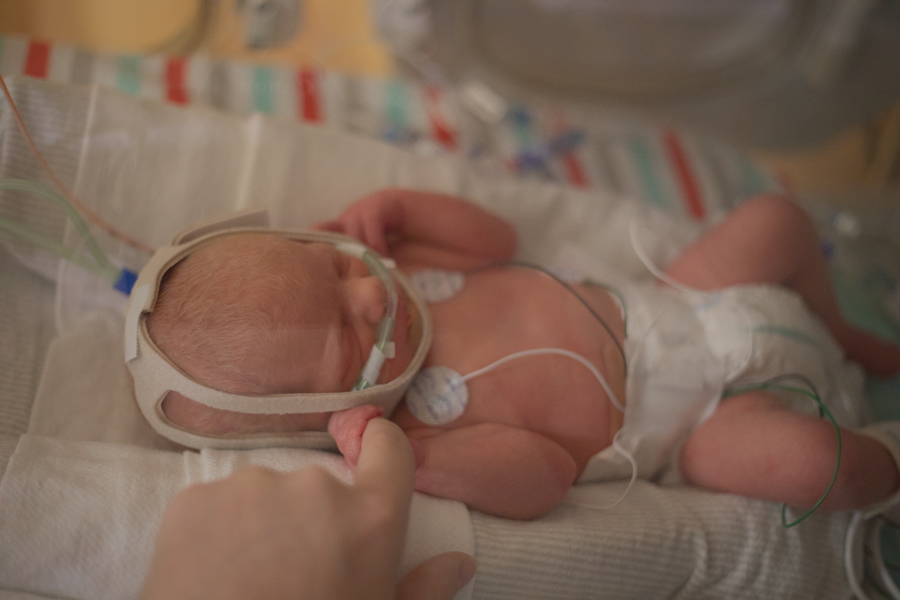 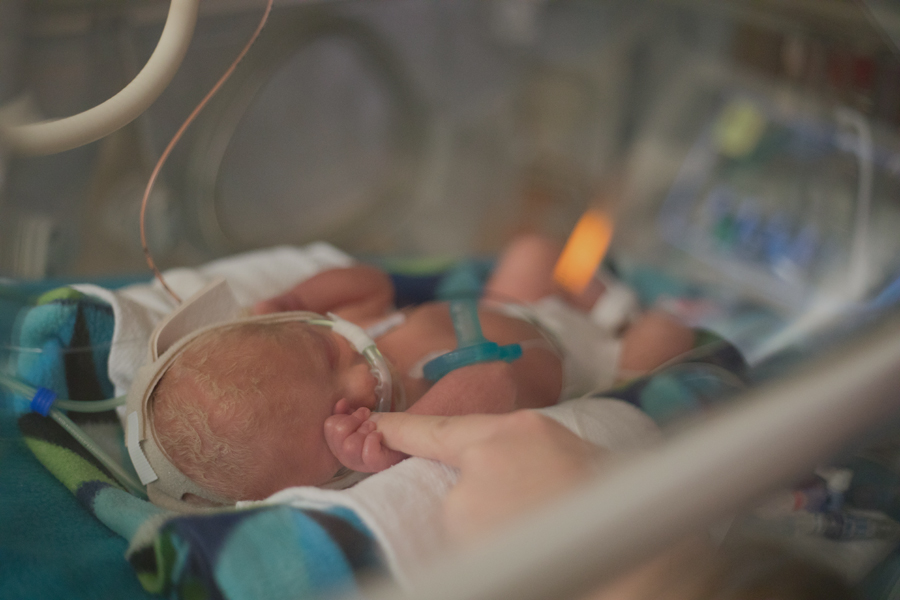 January 4th started out like any other “regular” day, but ended up being the luckiest day of my life. Ryan normally comes with me to my doctor’s appointments so that we can have lunch together. This time, I was running a bit late so I went alone. When I arrived at my appointment, I chatted with the doctor a little bit, we had a serious talk about the risks associated with a normal delivery and he asked if I’d feel more or less comfortable with a cesarean delivery. At this point, I was willing to go with the c-section because I just didn’t want any risk with Baby B’s velamentous cord insertion. We discussed that more, and then he asked if we could monitor the babies closer with more ultrasounds and non-stress tests (this is pretty standard with twins and we were getting to the end of the pregnancy.) so I, of course, agreed. He decided that on that day, I should have an ultrasound. 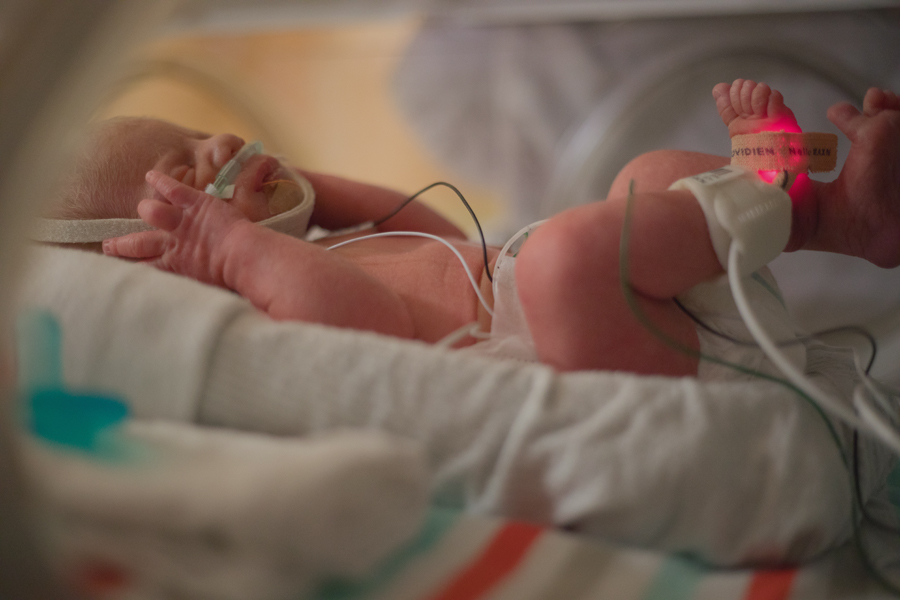 This is where things became very scary very fast. At my doctor’s office, they use a flatscreen television so that the parents can see what is happening on the ultrasound. on the screen, I can see Baby A kicking and playing but when we went to check his heart rate, it was only beating at 75bpm. So the ultrasound technician texts my doctor who had just stepped away for surgery. He calls, she misses it.. but another staff member comes in and lets us know that he was on the line. At this point, I know that things are not right and this probably just isn’t a case where baby is laying on his cord, etc. 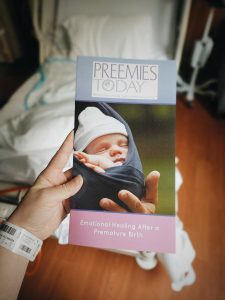 The doctor suggested that I have the stress test done right then and there. I asked if I could have the test done in the hospital instead because I just felt like I couldn’t take any more worry without being in a place where we could deliver if we had to. At this point, I’m laying on the ultrasound table freaking out on the inside and about to just let the tears flow. I’m scared, alone and very worried that I was losing one of our twins. So the ultrasound tech drives me over, I left my car at the doctor’s office because I was in no state of mind to drive.

At the hospital, we couldn’t find Baby A’s heartbeat with anything but the doppler. After trying for what seemed like hours, my doctor walks in and lets me know that we’re moving out to the operating room. A flood of about 15 nurses fills the room, like fairies almost, just flying about the room so swiftly, taking off my clothes, dressing me, putting in my IV and handing me consent forms. The whole time, I’m thinking about Ryan and what I should say to him. At this point, he only knew that I was having a test done at the doctor’s office. The anesthesiologist comes to let me know that I was going to be put under general anesthesia and intubated, due to the “nature of my delivery and lack of time, that an epidural just wasn’t going to happen.”

So I look at my phone and there are texts from Ryan asking how the test is going. I respond and let him know that I’m sorry he can’t be with me for this, that we’re doing an emergency C-section and that they’re going to put me under. I told him that I loved him, to call my friend (she would know just what to do) and to come to the hospital asap. I debated whether or not to tell Ryan that I was going to be put under full anesthesia because we have had the conversation about how scary that is.. several times. I just always felt like I would be one of the unlucky ones who didn’t wake up. We run to the operating room and on the way, I hear my doctor “what’s taking so long ladies?” And they told him that my IV came out, so another had to be placed. I have to say.. his sense of urgency was not reassuring. Still, all I could think about was my poor husband and what he was going through or telling the children. 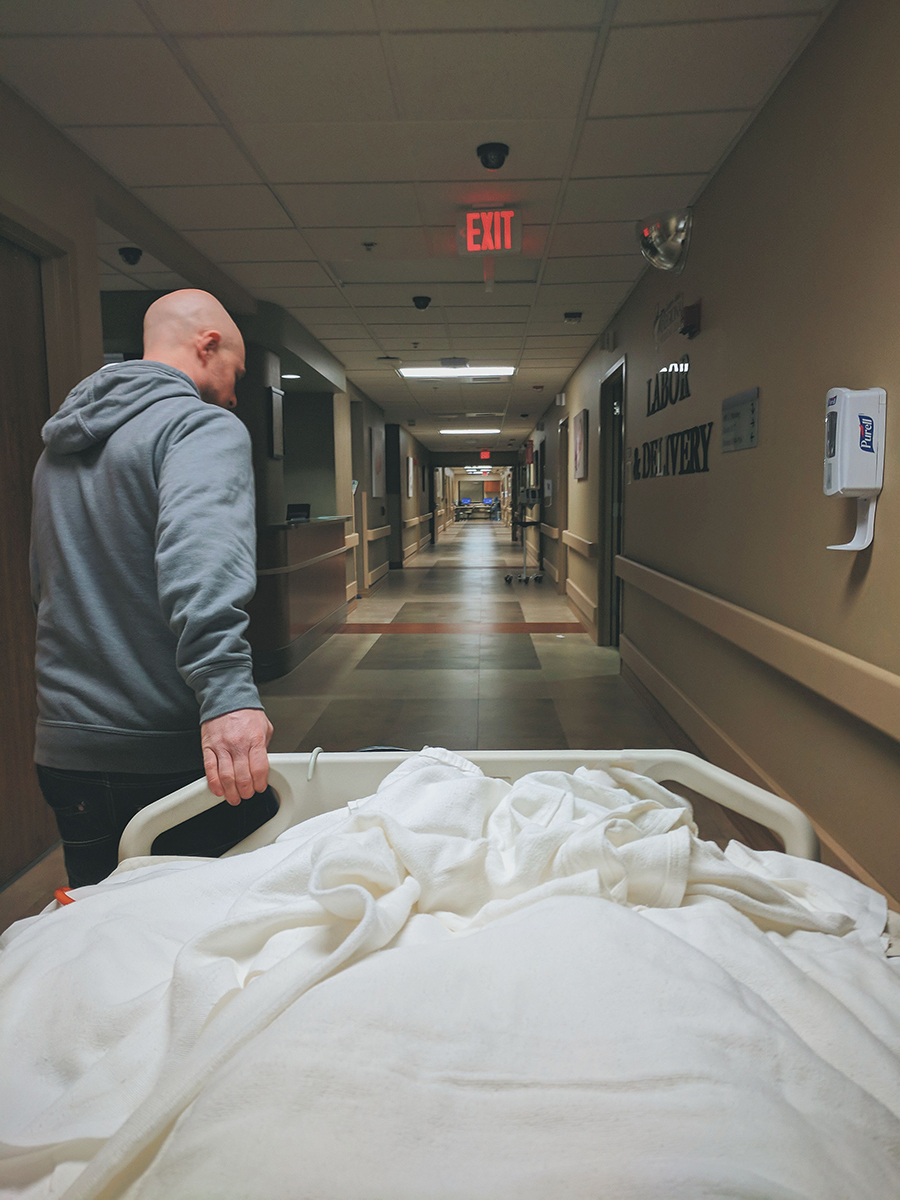 So I’m on the table with bright lights blinding me just listening to the nurses and my doctor shuffling around the room setting things up. A lady splashes me with freezing cold betadine and the next thing I have is the anesthesiologist overhead putting the mask on and letting me know that it was time to sleep. While all of the chaos was happening, I was silent. I wasn’t falling apart and freaking out but I was scared. These were the scariest moments of my entire life. I was thinking about losing a baby that I so badly wanted, that was a part of the other baby who was just fine, but was going to be delivered far too soon. The thought of going under and never waking up was also in my head… but that hardly seemed to matter in comparison to what the baby and his heart were going through. I was probably so scared that I was in a little bit of shock that all of this was happening so fast. I wake up to music and just one nurse. Definitely a different scene from when I fell asleep which was reassuring. They told me that everything went perfectly and that the doctors will be in soon to explain how everything went. About 5 minutes after I woke up, Ryan walked into the room and that was the best part of my day so far. I was hoping that he would be there before I woke up, but in hindsight, I think about how nervous he would be if he walked in and I was still sleeping. Everything worked out the way that it should have. 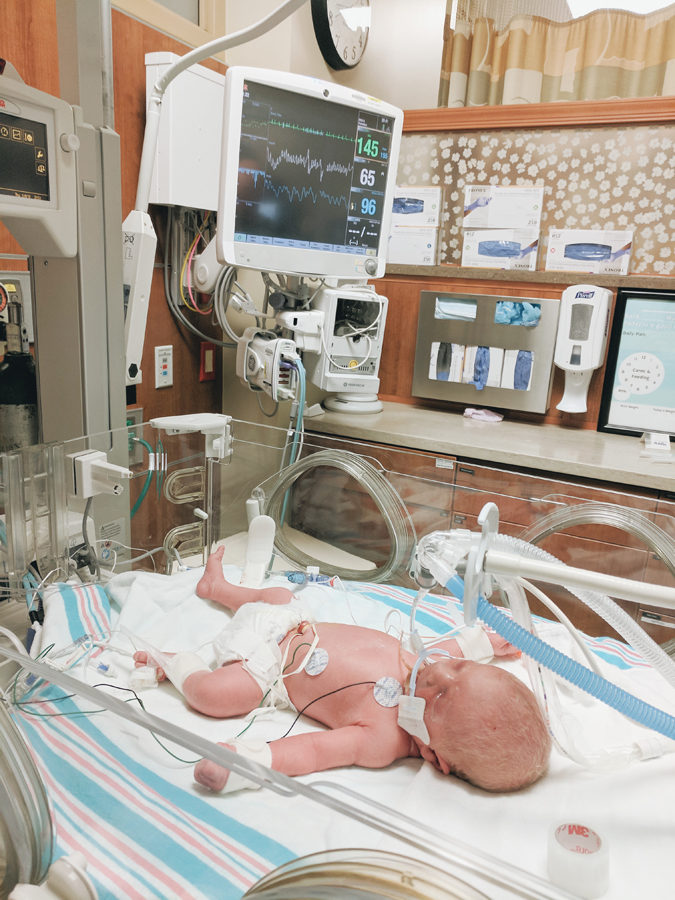 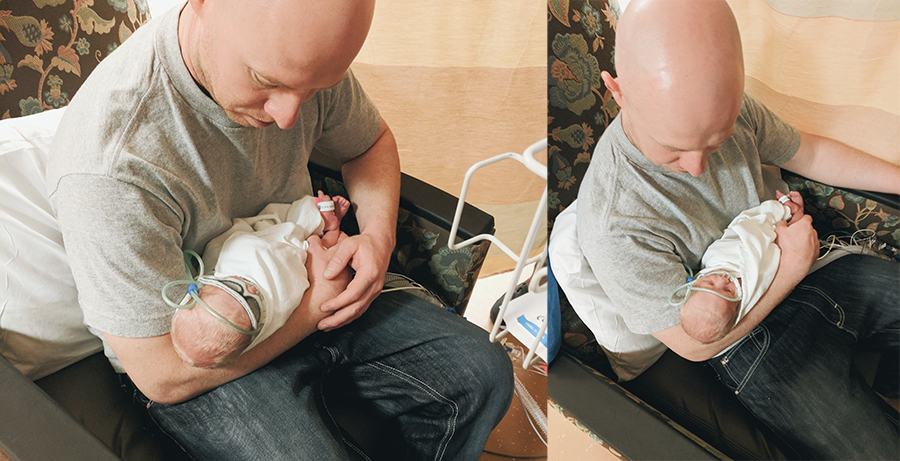 They came out kicking, crying & with beautiful skin tones! For the first 6 hours, Baby A’s heart rate continued to be unstable, dropping to that 75BPM rate. The NICU doctor said that because he was tolerating it so well, they think he had been struggling with this for a quite a bit of time.

That night, they ran tests including an ECG & and a heart structure test. Both came back completely normal and by the time the cardiologist had time to send over the results, Baby’s heartbeat was back to normal and stable. Now on day 4 of their life, he hasn’t had one incident since the day he was born. Our Baby A has always been “the wild one.” In the womb, he kicked more than Baby B and now that he’s on the outside, he is still the wild one. He kicks and stretches more, while Baby B takes in all of the TLC. 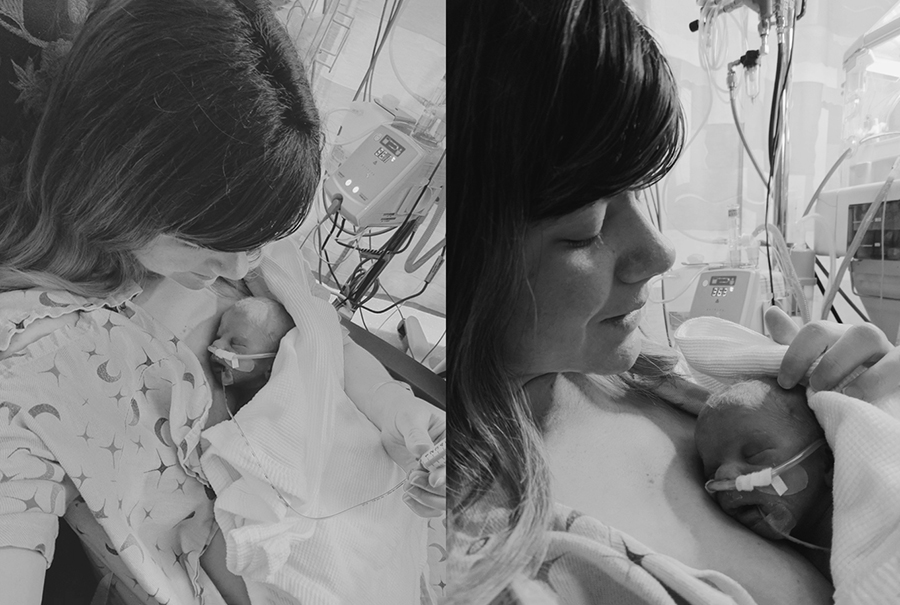 Ryan says they look exactly the same and I have to agree. They came out with very blonde hair and matching blood types but we won’t know quite yet if they’re identical or fraternal until we have their DNA tested.
As of now, the babies will be in the NICU until their due date. Of course, are hoping that they are able to come home sooner. Each day, they’re changing the levels and switching out the equipment that is used to get the boys ready for life on the outside of the womb & hospital.

My husband and I have a schedule to make it for rounds in the morning and then the night time cares so that we can hold them and wind down from our day, with them. As you might have noticed, the boys still don’t have names.. but! I think we know enough about their personalities to be able to make good choices. So, we’ll set up a quiet and relaxing environment over the next few nights to decide who is who and the names they’ll have for the rest of their lives <3 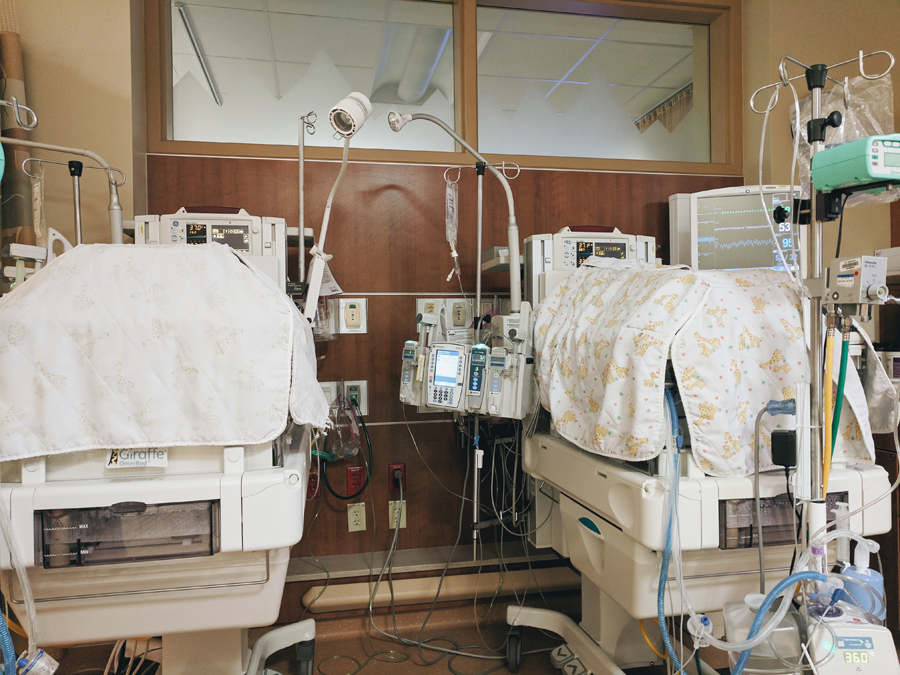 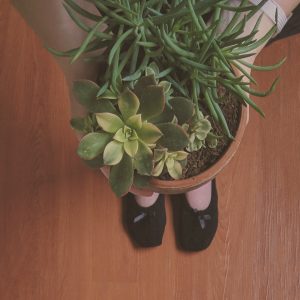 I’m doing great. This was my first c-section and honestly, I thought it would be a lot worse than it was. Everything went smoothly during the surgery and so far, my recovery has been more comfortable than it was with my epidural births. (I think for some reason, I just don’t agree with that medication so the recovery is really hard on me and my mental state.)

I do know that the hard part is just ahead, the NICU time is going to kill me. It’s very hard to leave the hospital knowing that your babies are being left behind. I know that they are in great hands and that we can visit any time we want, but it’s nothing compared to having them home. 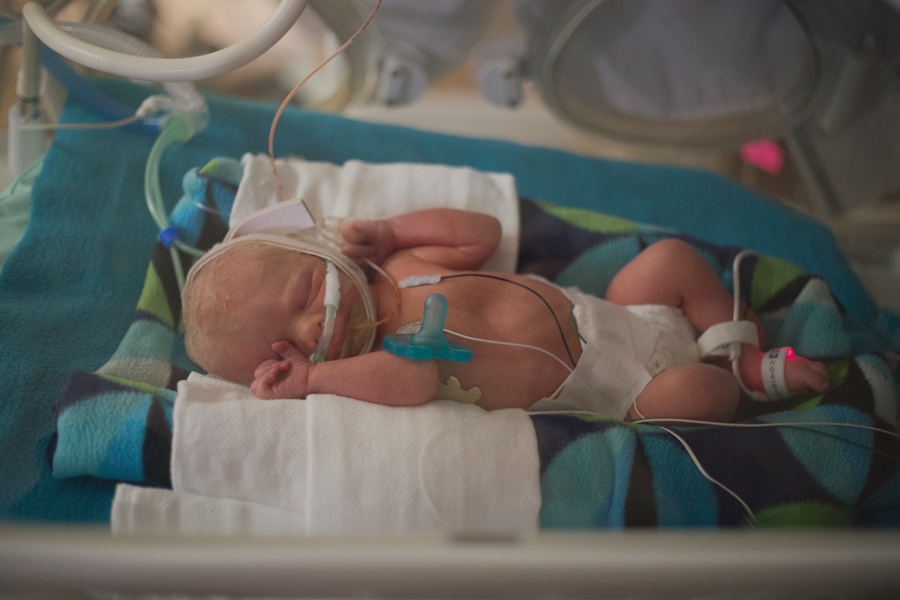 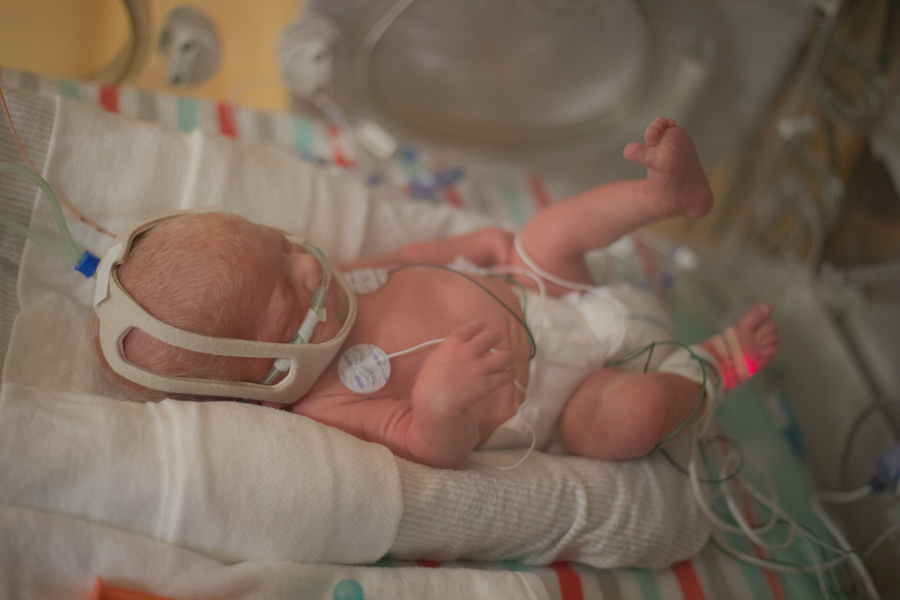 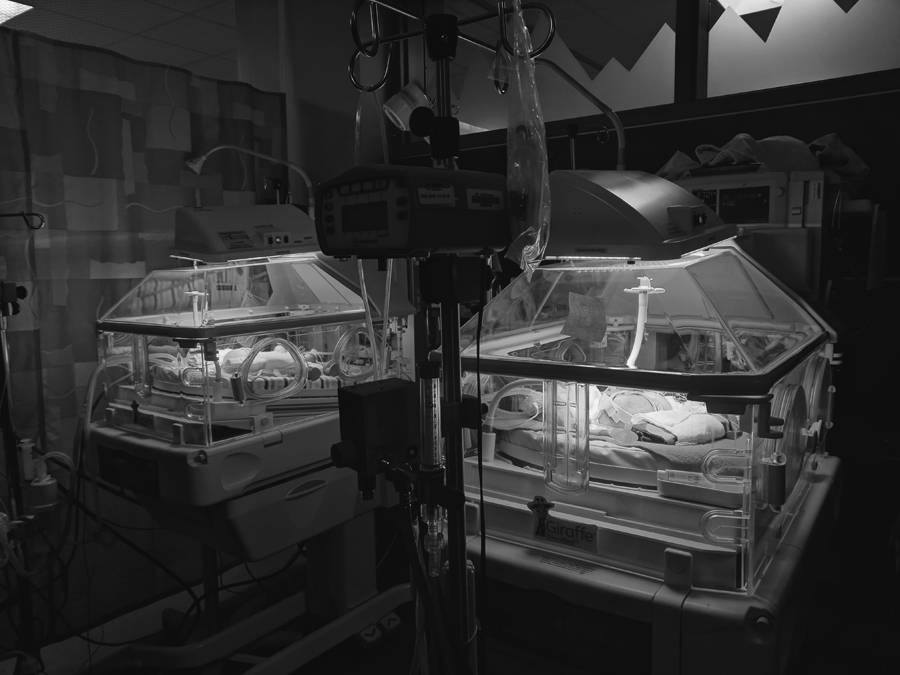